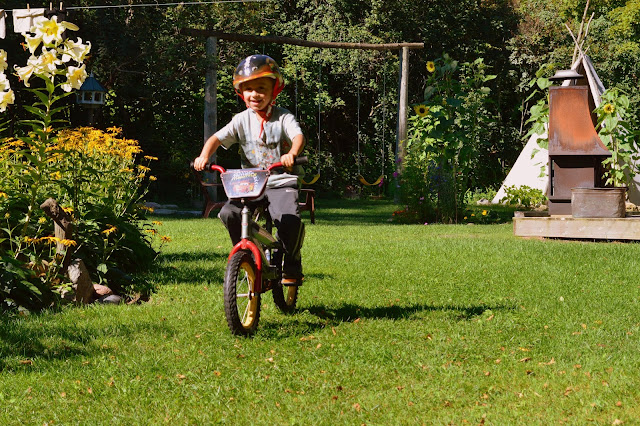 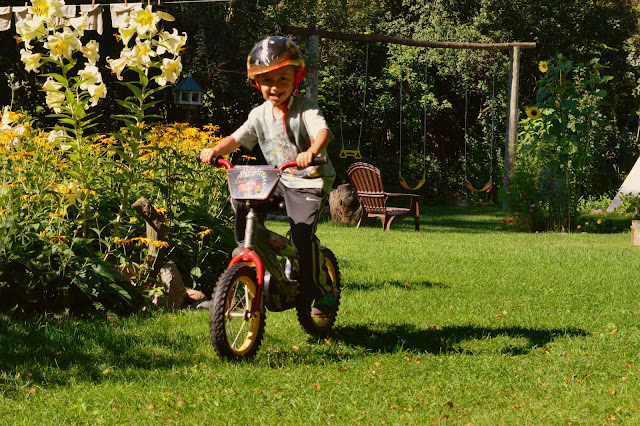 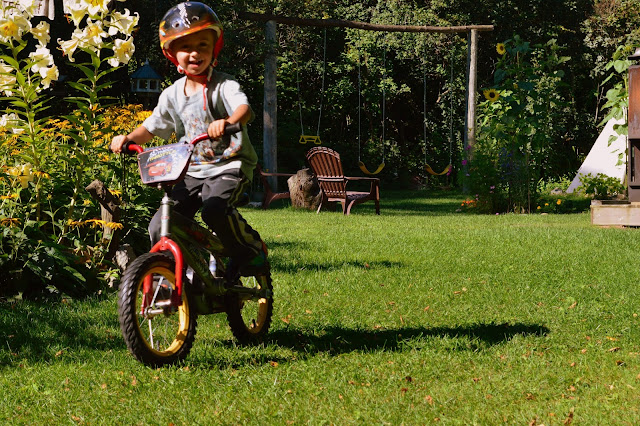 Last spring Reece was gifted a bicycle from my parents. He was excited to move up from his tricycle to a "big boy" bike, training wheels and all. Shortly after receiving it he was out riding with my dad and had a little fall, not a bad one, but enough to shake his confidence. The rest of the summer was spent on his scooter with a little bit of time here and there on his tricycle. I would ask occasionally if he wanted to ride his "red" bike, the answer was always, "not today."

This spring, once the snow had cleared, Reece was back on his scooter and also spending time on his tricycle. Again, I asked occasionally if he wanted to ride his red bike, but I was still met with "not today."

Throughout the summer the scooter has seen the most use and he as moved up from a three wheeled scooter to a two wheeled scooter. He has been happy flying up and down our walkway or the bike path on his scooter. Then last week he switched focus, he wanted to ride the red bike. He has been riding it up and down the walkway, on the bike path and on our quiet country roads.

Friday night Justin brought out his bike after dinner and the two of them rode up the road together while I walked behind with the dog. Upon arriving home I heard a little voice say, "can we take the extra wheels off?" I was already making my way into the house and continued to do so, not wanting to put too much pressure on him. Inside I could hear the chatter as Justin took the training wheels off. Then the call "don't let go". I watched quietly from a window as pure joy swept across his face.

I waited patiently for him to call, and finally after thirty minutes he came running inside asking me to come and watch.

There are no words to describe this moment. His pride shining through. His smile filling his face. I stood watching, in silence, wiping away a few tears and then ran over and gave him a high five. He was beaming, and so was I.

This little man of mine is growing up. I watch as each day he wakes up a little more confident and independent than the day before. He is testing himself, trying out new things and succeeding. Succeeding in his own way and in his own time, no pressure from me, or Justin. Instead we sit back and watch his journey unfold, walking with him, holding his hand when he wants us to and letting go when he wants to move ahead on his own.

Reece is carving out his own path in this world and I am so very happy and grateful to be along for the ride.
Posted by Kim at 5:00 AM