I am not much of an evening eater, give me a cup of tea (or three) and I am set. But sometimes, you just get that craving, you know the one, you want something....and on those nights a bowl of fresh popped, organic popcorn does the trick. 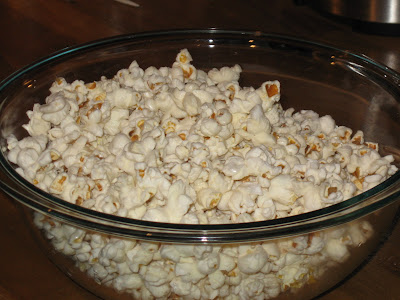 We do not own a microwave and I really don’t need another kitchen gadget hanging around, so a popcorn maker is not going to happen. So, instead we do it the old fashion way, on the stove top. And really what better way is there?
So, here’s how we do it.
Stove Top Popcorn
2 tbsp coconut oil (for popping)
2 to 4 tbsp coconut oil, melted (for topping, more or less depending on your preferences)
1/3 cup organic popcorn kernels
Sea salt, to taste
Nutritional yeast, optional, but really delish

In a large covered pot, melt the coconut oil and three popcorn kernels over medium heat. 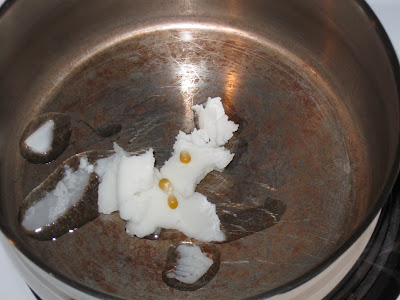 In a small pot, melt the coconut oil to top the finished popcorn.
When the three kernels pop, take the lid off, add the remainder of the popcorn kernels, give them a little swirl in the pot to coat them with the melted oil and replace the lid.
Soon the popping will begin. There is no need to do anything, just sit back and let it do its thing. When the popping starts to slow, turn the stove off and then when it really slows remove the pot from the burner.
Allow the popping to stop. Let popcorn sit for a minute with the lid slightly ajar.
Add popcorn to a large bowl, drizzle with coconut oil, sprinkle with salt and nutritional yeast. 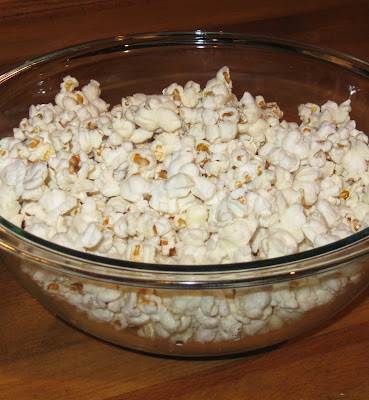 Enjoy!
Note: This makes one large bowl, or two small bowls.
Posted by Kim at 7:02 AM