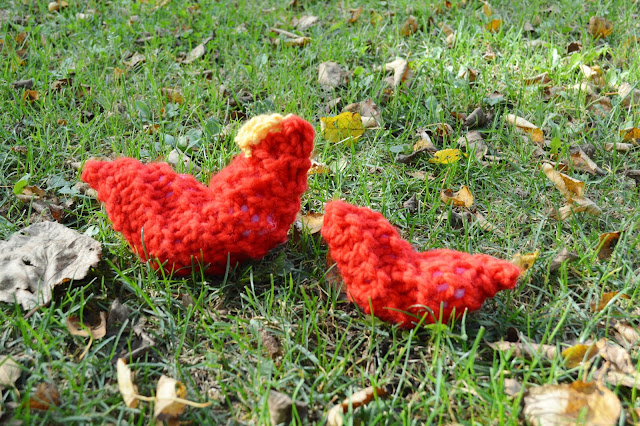 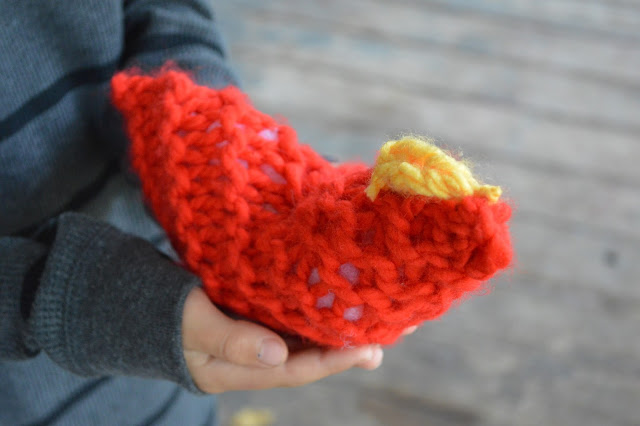 My little man has taken to knitting in a way I never expected. He gets up in the morning asking to knit, he sits in the afternoon knitting quietly, and before he goes to bed he wants to knit a row or two. It has been an absolute pleasure to watch him, to see the excitement in his eyes, and to sit beside him, both of us with needles in hand, knitting.

He completed his first project on Tuesday, a chicken. I did the casting on for this project, he knit a square, and then I did the casting off. I then set him up with a yarn needle, we folded the square corner to corner to make a triangle, and he stitched up the sides. Near the end, he left a little spot open, stuffed it, and then sewed it up. Together we pulled the left over yarn through the center, to create the body of the chicken, and then tied it off. Reece then finger knit a yellow comb for his chicken and I attached it for him.

To say he was a little excited to see the finished product would be an understatement. That chicken has gone pretty much everywhere with him, and he quickly decided that a baby chick was necessary, and once I cast on for him, he was busy, knitting away, making his baby chick.
Posted by Kim at 3:00 AM